**Please note that all general admission tickets have been sold for this event. Event sponsors, legislators, and special guests of Michigan EIBC are still able to register.

To put your name on a waiting list, please email Nicole Forward at nicole@mieibc.org We anticipate that some seats will open up as the event gets closer. Thank you.

Michigan EIBC is thrilled to announce that Governor Gretchen Whitmer will be the keynote speaker at the 7th Annual Michigan Energy Innovators Gala on Thursday, November 14 at the Kellogg Center in East Lansing. We’re excited to have her join us to celebrate the accomplishments of the advanced energy industry and the new opportunities that her leadership is creating. 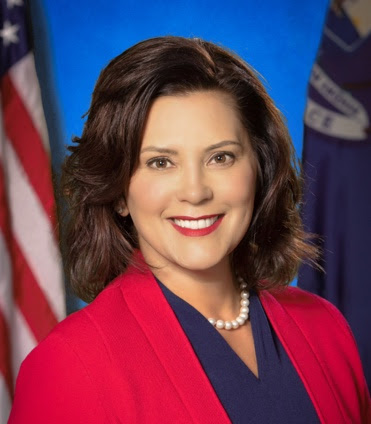 Governor Gretchen Whitmer is a lifelong Michigander. She is a lawyer, an educator, former prosecutor, State Representative and Senator. She was the first woman to lead a Senate caucus. But the most important title she boasts is MOM. Inspired by her family, she’s devoted her life to building a stronger Michigan for everyone.Governor Whitmer was elected to the House of Representatives in 2000 and elected to the Michigan State Senate in 2006 where she served as the Senate Democratic Leader. In the 2018 gubernatorial election, Governor Whitmer won all 83 counties in the primary and won the general election with 53 percent of the vote. Since taking her oath of office, she has put together the most diverse cabinet in our state’s history and has signed executive directives to clean up our drinking water, end discrimination in state government based on sexual orientation and gender identity, secure equal pay for equal work, and expand opportunities for small and disadvantaged businesses.

Governor Whitmer and her husband Marc Mallory live in Lansing with her two daughters, Sherry and Sydney. Her three stepsons, Alex, Mason, and Winston all live in Michigan as well. Governor Whitmer earned a bachelor’s degree and law degree from Michigan State University.  Born and raised in Michigan, Gretchen Whitmer is honored to serve as Governor of Michigan.

During the gala, we celebrate individuals and businesses who have worked to grow Michigan’s advanced energy sector in 2019. Advanced energy business leaders, legislators, Michigan Public Service Commission staff, state government officials, and other key decision-makers will be in attendance, and 90 minutes has been set aside for networking before the program begins. Awards will be presented in the following categories:

**Sponsorship opportunities are now sold out**

Thank You to Our Event Sponsors!